Elephants, members of the group proboscidea, are beloved by everyone; they are big, charismatic, and essential keystone species throughout their native range, even in the places where they are now extinct. Once one of the most widely distributed groups of large herbivorous mammals on the planet, they are now confined to tropical Asia and Africa, and even then just barely in many places. I have mentioned them before when talking about some of the regions which they once inhabited, but never in great detail. That changes now, and in this post I hope to cover pretty much the entire native range of proboscideans on all continents, focusing mostly on those now extinct. Just to clarify briefly what I mean when I say "native", while the term has no true agreed upon meaning, for the sake of this post I will define it as any animal which is currently or would still have been present in an area, if not for human activity. Another fact that must be mentioned is that the terms "proboscidean" and "elephant" do not mean the same. All elephants are proboscideans, but not all proboscideans are elephants. The proboscidean family tree is typically divided into two main groups, the elephants and the mastodons, which split early on in their history. So, with that settled, let us begin with the two places where elephants are still present. 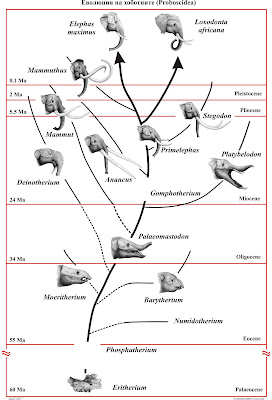 
Africa is important in the evolutionary history of proboscideans, as, like with us humans, it is the continent on which they first evolved. When the earliest proboscideans emerged during the late Paleocene, they were comparatively small, hippo-like animals, only vaguely resembling the long-trunked giants we know today. Back then Africa was an island continent, isolated from the rest of the world, allowing for a whole host of unique lifeforms to emerge, the ancestors of elephants among them. From then til now, proboscideans of one group or another have been continually present in Africa, always playing a major role in the ecosystems of the continent. As this post centers on modern proboscideans however, I will not dwell on their evolutionary history for much longer, as that subject deserves a post of its own. Surprisingly however, when it comes to discussing "native" proboscideans, Africa is probably one of the most difficult continents to do so on. The reason for this is that, as mentioned before, it is also the home continent of hominids. For this reason, our ancestors have been present there for far longer than they have anywhere else, making it difficult to determine what, if any, extinctions were caused by humans. For the sake of simplicity, we will limit the definition of "human" to our genus Homo, which gives us around 2 million years to work with.

Obviously we have the two extant species of elephants on the continent, the African bush elephant (Loxodonta africana) and the African forest elephant (Loxodonta cyclotis). These have been a constant presence throughout human history, but alongside them lived another proboscidean, Deinotherium. Deinotherium was not an elephant, nor was it a mastodon. Instead it was a member of its own family, which diverged even earlier in the proboscidean tree. The tricky thing about Deinotherium is whether it should be counted as a human-caused extinction. It died out during the early Pleistocene, 1 million years ago. This puts its extinction 800,000 years before the rise of our species, but just at around the point where humans were becoming increasingly predatory and advanced. This also roughly coincides with the time when the last sabertooths disappeared from Africa. Was this a climate-related extinction, caused by the beginning of the ice age, or a result of the increasing hunting pressure exerted by our ancestors? To complicate matters further, even if hominids were the main drivers behind the extinction of Deinotherium, does that really count as a "human-caused" extinction? And should an animal that died out 1 million years ago still be considered native? At what point do the actions committed by our ancestors go from artificial to natural? Needless to say, any and all answers to those questions will almost certainly be wholly arbitrary. 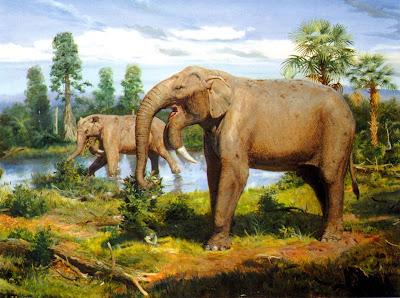 Beautiful illustration of a couple Deinotherium, by Zdeněk Burian

Moving on to Eurasia, the picture suddenly becomes far clearer. Central Eurasia was home to 3 species of proboscideans, all elephants, namely the Woolly mammoth (Mammuthus primigenius), European elephant (Elephas antiquus), and Asian elephant (Elephas maximus). The Woolly mammoth was distributed all throughout northern Eurasia, its range expanding south during the glacial periods. It likely had a mixed diet, due to both being found in semi-forested regions along with open plains, and as such was probably something of a generalist, much like extant elephants. In particular, the Woolly mammoth is associated with the so-called "mammoth-steppe", a highly biodiverse grassland habitat that once covered much of northern Eurasia. It was maintained by the vast quantities of grazing herbivores present in the past, among them the mammoths. Slightly larger than an African elephant, what that may have been a result of Bergmann's rule, adults would have been almost entirely free of depredation, except that is of course by humans. Young mammoths on the other hand would have been highly vulnerable, and there is good reason to think that they often fell prey to the countless lions and hyenas that shared their environments. A particularly interesting fact is that the Woolly mammoth is technically not a prehistoric animal. One small population persisted on the isolated Wrangel island until just 3000 years ago, at which point humans arrived from the mainland and history repeated itself. This means that, had the early ancient Egyptians known where to look, they could actually have met the last of the mammoths.

The European elephant has already been covered before in some detail here, while the Asian elephant is of course still extant. This is not to say that they are doing particularly well however, and even ignoring the plights they are currently facing in their remaining range, this is in fact a relict distribution, as they were once found throughout nearly all of southern Eurasia, and would have overlapped to some extent with mammoths to the north, and European and African elephants to the west. This leads us to the last part of Eurasia that needs to be covered, Indonesia. Now, Asian elephants are still present in northern Indonesia today on some of the larger islands, but before the arrival of humans, other, more peculiar proboscideans were found throughout the isolated southern parts of the archipelago. These were members of the genus Stegodon, part of the subfamily Stegodontidae, a group of true elephants that branched off from the family's extant representatives during the Miocene. Stegodonts disappeared from mainland Eurasia and Africa during the early Pliocene, but dwarf species persisted on isolated islands in Indonesia until the latest Pleistocene. The youngest of these species lived on Flores, where it shared its habitat with dwarf hominids and Komodo dragons. It would appear to have gone extinct shortly before the arrival of humans, as a result of a massive volcanic eruption that also wiped out the aforementioned dwarf hominids.

This brings us to the Americas. While Africa is indeed the ancestral continent of proboscideans, and Eurasia home to many species, by the late Pleistocene the Americas were home to by far the most extraordinary proboscidean fauna. Like in Eurasia, Woolly mammoths were present in Alaska and Canada, ranging further south during the glaciations, but another species of elephant, the Columbian mammoth (Mammuthus columbi), was more abundant yet, ranging through almost the entirety of North America. At over 4 meters in height, it was significantly larger than the Woolly mammoth, and indeed one of the largest mammoths of all time. The ranges of the two species overlapped in Canada, while the southernmost parts of the Columbian mammoth's range lay in northern Mexico. One particularly interesting thing about Columbian mammoths is that their remains are heavily associated with Clovis artifacts, providing further evidence of the overkill hypothesis. Another significant animal that must be talked about when discussing North American proboscideans is the American mastodon (Mammut americanum). A bulkier, more robust animal, the mastodon was not as tall as its mammoth cousins, and looked quite different from them. While elephants have tall heads held high above the ground, mastodons had lower skulls with sloping foreheads, giving them a highly distinct look. Unlike mammoths which were probably generalists with a mixed diet, evidence suggests that mastodons were strict browsers, mostly restricted to mere densely forested regions.

South America was quite different in regards to proboscideans. While the mammoths of the northern continent were reminiscent of the Eurasian faunas, the South American assemblage was completely distinct. In place of the mastodons and mammoths were a group of elephants called the gomphotheres. While technically true members of Elephantida, they are about as distant as any member of the group can be. Short-legged with a sloping forehead, they were relatively mastodon-like in appearance. This is not however due to convergent evolution. This smaller, more robust build is almost certainly ancestral to all proboscideans, and it is in fact the elephants that possess a deviant morphology. Though once also common throughout Afroeurasia and North America, they were confined to South America by the mid Pleistocene, at which point their decline seemingly stabilized, and they continued to thrive up until the arrival of humans. The group was represented by two genera when humans arrived, the tropical Stegomastodon and the temperate Cuvieronius. The latter in particular may have survived until just 9,000 years ago in the mountains of Chile, though as usual, some people have claimed to have evidence of gomphotheres surviving much latter. A heavily stylized rune on and ancient temple is claimed by a few to represent a gomphothere, though this is heavily suspect, as the rune is so vague as to plausibly represent pretty much anything. Another bit of purported evidence is the reports of elephants by some early European explorers in South America. This claim is also riddled with problems however, as these could just have been escaped animals brought by other Europeans or miss-identifications of other animals. This hardly matters regardless, as there is no way to even verify these supposed sightings either way. 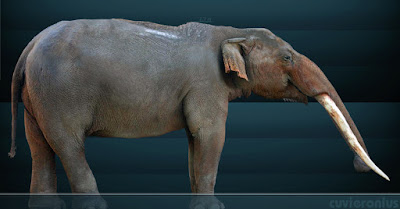 There is one last major aspect of proboscidean distribution that must be discussed, namely the island endemic dwarfs that were present many places. I mentioned the stegodonts of Indonesia, but dwarf elephants were also present both on the islands of the Mediterranean and the Channel Islands of California. This post has grown long however, and these dwarfs would be most appropriately discussed in their own post. For now, I hope that this has been an interesting look into the past range of elephants and their kin. We tend to heavily associate these animals with their present day relict distribution, but this is an incomplete picture. Elephants were once one of the most successful and diverse groups of large mammals on the planet, represented by numerous different families across dozens of continents. There is a sadness in seeing them reduced to such a meager standing today, but as long as some species remain, so does hope, and the potential remains for them to recolonize parts of their previous range, perhaps with the help of us humans. In some way, while the great diversity of lineages will never be regained, and the mastodons and gomphotheres are gone for good, reintroduction projects of this sort may offer some form of repentance, or at the very least ensure that the animals that did survive will live with us into the future.