Lands Pristine: Europe during the Eemian

Previously I have spoken about prehistoric Australia in great length, namely here and here, and recently wrote an in-depth post about ancient California. Pre-Human Europe however has been something of a neglected subject, despite also being the one I have the greatest interest in. I have mentioned details about it in passing, but now is its time in the limelight.

When people think of prehistoric Europe, they typically picture the early Holocene, covered here, but as that post discusses, the pristine European wilderness was already gone by then. No, to see Europe as it would still have looked today if not for our presence, one must go back to the Eemian, also known as the last interglacial. Spanning from 130,000 to 115,000 years ago, it was the last point in time when the climate resembled todays, but the megafauna had not yet died out. All of the modern species we know today already existed, and at a cursory glance it would have looked quite similar, but the Eemian was to modern Europe what present day southern Africa is to its northern counterpart, an unspoilt, pristine version of the latter, in which the now vanished giants were not just present, but dominated the landscape. In this post I will be covering primarily western Europe, as that is the place with which I am most familiar, and we will explore a Europe quite different from what we know today. 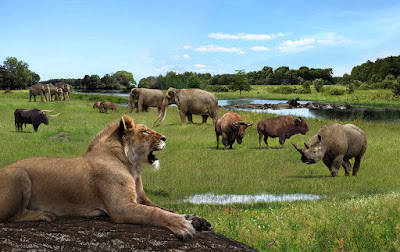 A World In The Tar Pits: California before Humans

California is known for many things; Hollywood, Silicon valley, and more recently unprecedented droughts. What it is less known for however, at least to the general public, is the vast diversity of life that once lived there. Located in California lie the La Brea tar pits, which are, as the name suggests, a group of tar pits, that have been trapping animals for the last 40,000 years, giving us an incredibly detailed view into the paleofauna of the region. Perhaps the best site for late Pleistocene animals in the world, it certainly contains some of the most spectacular creatures. From giant ground sloths and saber toothed cats to mammoths and mastodons, prehistoric California had one of the most diverse megafaunal assemblages in the world, far outmatching that of even Africa, both today and in the Pleistocene. In this post we will be travelling back 11,000 years, shortly after the end of the ice age, and right before the arrival of the first humans.

Paleoenvironment of La Brea, by Charles Knight. The animals in the foreground are the sabertooth Smilodon, Harlan's ground sloth, and the giant vulture Teratornis. In the background can be seen a herd of Columbian mammoths.

Big cats of Europe - past and present

British big cats, German big cats, Danish big cats, French big cats. Every European country seems to be reporting sightings of mysterious, large, often black cats nowadays. Of course, in the vast majority of cases, these are either hoaxes or misidentification, the fact that melanistic animals are most often reported, despite being far rarer than individuals of normal colouration, should itself be a clue to this reality. Whatever the case. some of these sightings have possibly been of real big cats. In central Europe for instance, lynx are fairly widespread, and to a person unfamiliar with the animal, could quite convincingly appear as a leopard or jaguar. These sightings are less tenable on the British isles, but even in Scotland wildcats are present, if barely, and hybrids between them and domestics are often significantly larger than your average housecat. Barring the occasional zoo or circus escapee however, the only true big cats to be encountered in present day Europe is the aforementioned lynx. But this was not always the case. Today I will be talking about the history of big cats in Europe since the last interglacial, their distribution, diversity, success, and eventual downfall by way of spears and bows. 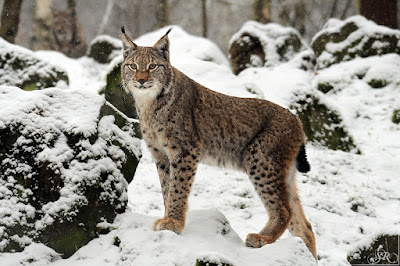 An Eurasian lynx, the only real big cat left in Europe

Frozen in time: The illusion of stable ecological communities and the geological perspective

Evolution as a process is, at its most basic level, relatively easy to understand: Slow adaptation over many generations favoring forms more well suited to their environment. This is of course so overly simplified as to border on flat out inaccuracy, there are so many complicated processes at play in evolution that one could not possibly do them all justice in a brief summary. The point however stands that the general perception of what evolution broadly speaking is can be defined as an endless process of refinement. We tend to perceive the species that exist today as perfectly adapted to their environments, fully capable of persisting and surviving on their own. After all, if this was not the case, how could they even be here in the first place? This mindset is not necessarily wrong at face value, species must be competitive in order in order to persist. The issue here is the lack of perspective. Species and populations that may seem stable and self-sustaining in the short term may actually be in a state of chronic decline over a longer course of time. The lifespan of an individual person is so fleeting compared to the vastness of deep time, that perceiving such declines is essentially impossible without the benefit of hindsight.

When we look at a pristine forest, an un-managed oldgrowth, we see a vast and complex community of plants and animals, each fulfilling its own role in the ecosystem. Trees of varies species tower above us, often forming dense stands, seemingly impenetrable and ageless. Yet this is an illusion. Pollen cores and fossil evidence clearly shows that forests, and all other ecosystems for that matter, are in a state of constant flux, everchanging, but on a timescale too slow for us to perceive. The communities of trees that a person visiting a Himalayan forest today might see would be almost wholly different from that experienced by a person walking through the same area just a few thousand years prior. But this state of constant change is not just an endless reshuffling, many species once common are now gone, and many that we today would consider "staples" of the forests will no longer be here millennia in the future.